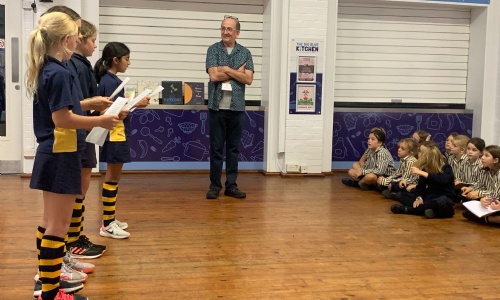 There has been much excitement around school this week, with the start of the Henley Literary Festival, which the children so enjoy attending.  Many of the children have heard talks through the course of the week and I was delighted to be able to accompany Year 5 to listen to Natasha Farrant yesterday, who spoke of the inspiration behind the settings and characters in her latest book, Voyage of the Sparrowhawk. The children were gripped by all she had to say and could not fail to have been inspired to pick up a pen and start writing their own stories. They asked many fascinating questions afterwards and were fortunate to have Natasha personally sign their copies of her book.

With it also being National Poetry day yesterday, we invited the poet James Carter to speak with the children during assembly.  He then ran a series of workshops for all age-groups through the course of the day, which culminated in an afternoon gathering of the upper school children, at which a number of them read aloud their fabulous poems which he had inspired. James was both funny and irreverent, encouraging the children at times to buzz like flies, whilst he played various ditties on the piano and also on his bizarre hand-keyboard/kazoo!

I, for one, am very much looking forward to the Friends' cake sale this afternoon at Courtney's between 3.10pm and 4.30pm, or whenever they run out of cakes, which I hope will be after I have been able to visit!  Judging by the speed with which the cakes disappeared at the last sale, I would encourage you to be there at your earliest opportunity.  Please note the important collection arrangements in the letter below and please remember to come in through the Front Door and exit from the Courtney's gate, as we will have a one-way system in place.

Harvest collections can be brought in from Monday morning, and either left on the tables inside the Front Door or on the table inside the Courtney's gate. We will be supporting NOMAD's food bank again this year and will be hearing from members of the team at our assembly on Monday as well as at the Harvest Service on Friday at St Mary's, which I hope you may be able to attend. They and we are most grateful in advance for your generosity and details about attending the service as well as the items they would welcome as donations can be found below.

Having only just packed away my shorts and flip-flops, it seems far too early to be thinking about Christmas, however the children are already starting to become excited about the prospect. I have seen a number of beautiful Christmas card designs and I should remind you that designs need to be returned to school by Monday 11th at the latest if you are wishing to order your child-designed Christmas cards this year.

Following on from the successes of our children at the Chiltern Edge Cross-Country events and the achievements of our parents who took part in the London Marathon last weekend, best of luck to those of you who are taking on the challenge of the Henley Half Marathon this Sunday.