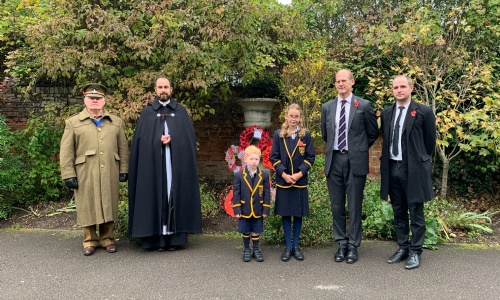 Our focus this week has been on Remembrance - of the sacrifice that others have made and continue to make for our freedom, our safety and for our peace. On Monday, Lieutenant-Colonel Richard Nall spoke to us about his experiences as an officer serving with the Army Reserves in Iraq. We were fascinated to hear about the importance of the role the army played in keeping the peace, in policing and in working with local communities to those ends. We gained a sense of the challenges the troops faced in living in the desert and we loved hearing about the four-legged friend the troops made whilst out there.

Having an understanding of the role the military play in today's world hopefully helped set the scene for yesterday's Act of Remembrance, which was a very moving occasion. I was most impressed with the behaviour of the children, and for the beautiful poppies they had helped to create which we laid in the garden of Remembrance at the end of the Service. Mike Willoughby, a local historian who has researched those from the Henley area who fought and died in the First and Second World Wars, represented the fallen and he appeared appropriately in the dress of an officer in the First World War. Father Jeremy, the Rector of St Mary's led our prayers, and Mr Congdon played The Last Post to commence our two-minute silence. It was wonderful to have so many of our parents present and to notice that a number have military connections which added to the poignance of the event.

On Wednesday, we held the school's first Food Council, which I gather was a great success. The children sampled a delicious main dish, which included butternut squash, and I was most impressed to hear that it was very well received by them and will be added to the menu as a result. The children gave their views on the current provision, and Barry the Head Chef and his manager, Angela, were most appreciative of their feedback (please excuse the pun), which will only help to improve their provision.

There is much for the children to look forward to next week, with 'Odd Socks Day' on Monday providing us with the opportunity to sport our most garish and mismatching footwear in support of Anti-Bullying week. Behind the fun, the clear message here is that we are all different and that we should celebrate being so. On Friday, with Children In Need, we will be encouraging the children to come in wearing their most dotty and/or sparkly outfits. There will be various Children In Need items of stationery and headwear for the children to purchase through the course of the week, more information about which can be found below.

From September 2022, we will be expanding our Prep provision to include two dedicated Year 3 classes.  To that end, on Tuesday 30th November, from 7pm to 8.30pm, we will be hosting a Prep School Open Evening for our Pre-Prep parents, many of whom have not seen the Prep School or met any of the staff there.  Following a drink in the Hall, the parents will have the chance to engage with the staff, to hear about the ways in which we are developing our Co-Ed provision and to see the facilities the Prep School children use on a daily basis.

It has been wonderful to have such interest in the Pre-Prep from prospective parents and the school is growing healthily as a result. Next academic year, we will have two forms all the way through the school from Reception upwards. With two forms from that point in Year 3, we will be seeing that year as an important entry point to the school, which will be reflected in our communications.

We are in the process of interviewing for the various staff roles I have mentioned in previous newsletters and I will update you as we make appointments over the coming months. In addition to those roles already advertised, we are keen to find another GAP student for the Spring Term with a particular focus on supporting the girls, as Miss Nall is keen to travel for that term before rejoining us for the Summer Term. We would be most grateful if you could please spread the word and ask anyone who is interested to contact Mrs Cooke for further information. Applications for this role will close on Friday 26th November.

Thank you for your continued support with regard to our approach to COVID. If your child shows any of the main symptoms, including a cough, please can you book a PCR test and keep your child at home until a negative result has been received. We do not currently have any confirmed cases in school and whilst it is inevitable that there will be some during the second half of term, we hope to keep these numbers to a minimum at this particularly fun part of the year by taking a sensible approach.

Finally, do remember to vote for your Top Teacher in the Henley Standard  Community Awards which you can do here.  You will only be able to do this once.